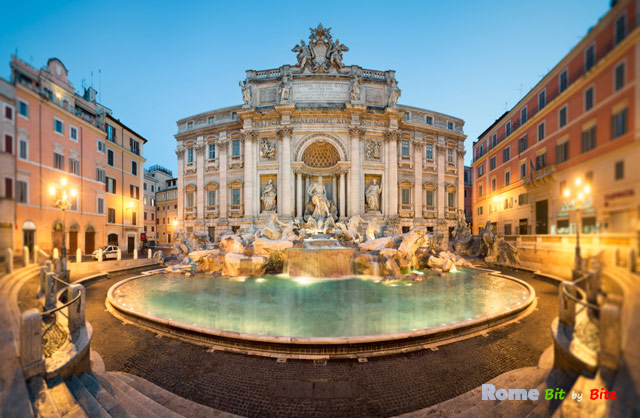 The Trevi Fountain is the largest Baroque fountain of Rome and probably one of the most famous fountains in the world, especially after Anita Ekberg bathed in the fountain in the Fellini movie La Dolce Vita. 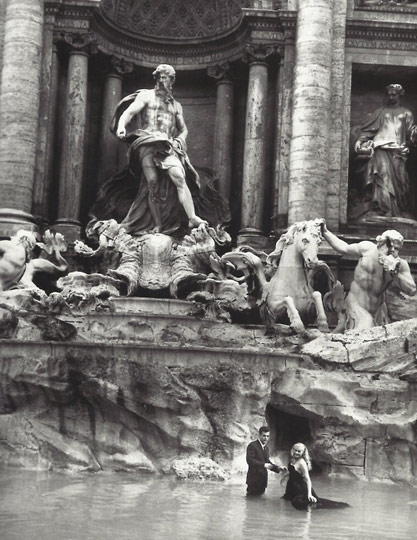 Anita Ekberg and Marcello Mastroianni photographed by the set photographer Pierluigi Praturlon on the set of La Dolce Vita (Fellini, 1960). 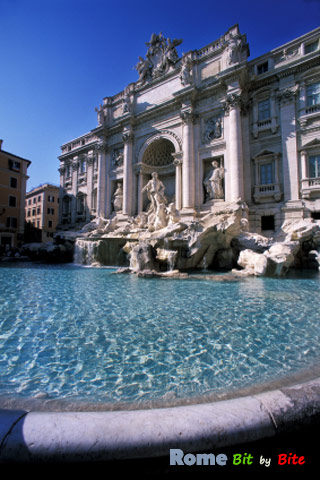 Designed by Nicola Salvi in a style inspired by Bernini, the fountain took 30 years to complete. The original plans for the Trevi fountain had been designed by Bernini, but when Urbano VIII, his commissioner, died in 1644, Bernini fell in disgrace and the project was halted for 60 years. It was taken over by Nicola Salvi under the papacy of Clement XII, but it was not until 3 decades later that the Trevi fountain could finally be inaugurated by Pope Clement XIII.

The main theme of the Trevi fountain is the sea, with as central statue Ocean (or Neptune). Next to  Ocean, who rides a shell-shaped chariot pullet by two sea horses and two tritons, stand Salubrity and Abundance (health and well being). The two horses, a calm one and a wild one, represent the two states of the sea. 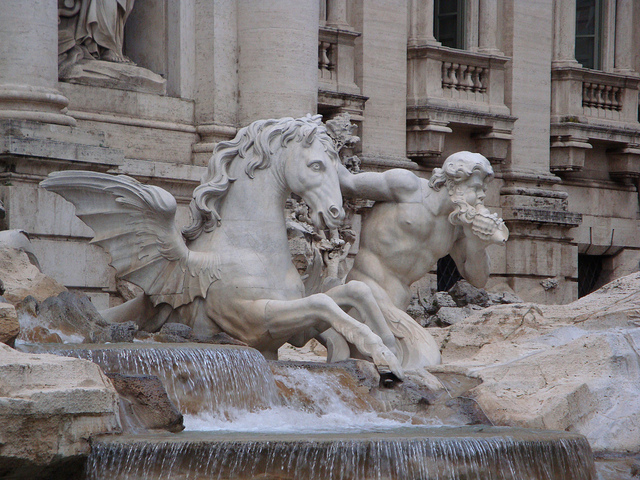 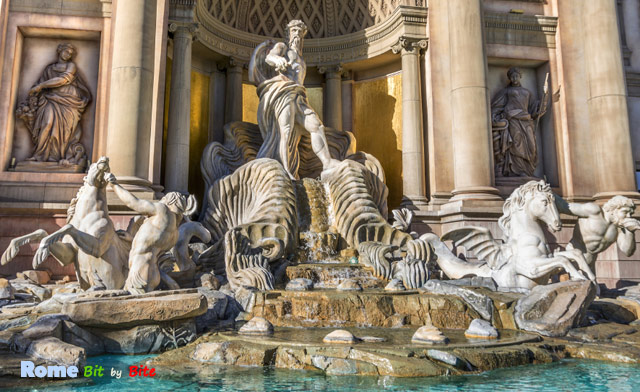 The central Statue of the Ocean (1759-62) stands on a shell-shaped chariot, pulled by two finned sea horses lead by two tritons.

The name of the fountain is believed to derive from tre vie, referring to the three roads that converge on the eponymous square. Another explanation is that the place was named after the young virgin Trivia who discovered the spring that was used to bring water to Rome through a long canal called Acqua Vergine. As we saw above, it was Clement XII who subsequently commissioned Nicolà Salvi to adorn the end of the canal with a majestic fountain.

The fountain also appears as a background in the videoclip of the Bon Jovi song Thank You For Loving Me. 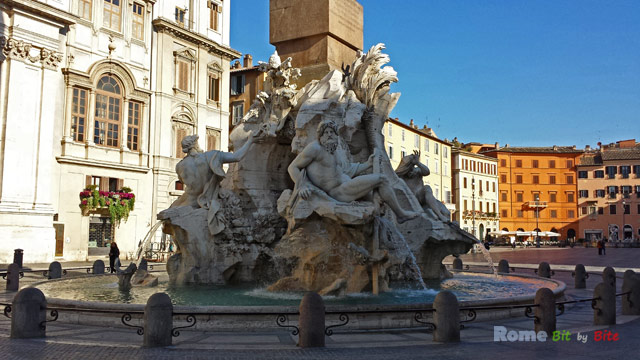 Located at the center of the beautiful Piazza Navona, the Fountain of the Four Rivers was commissioned in 1651 by Pope Innocent X, whose family palace, the Palazzo Pamphilj, faced onto the piazza. 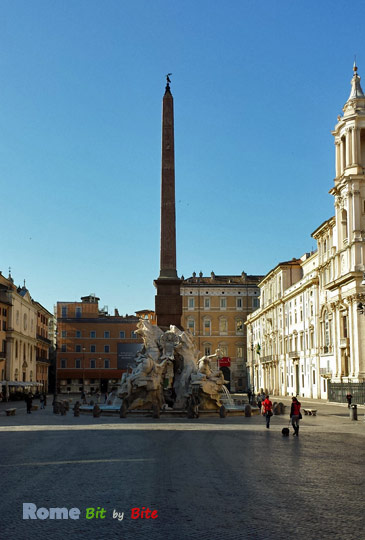 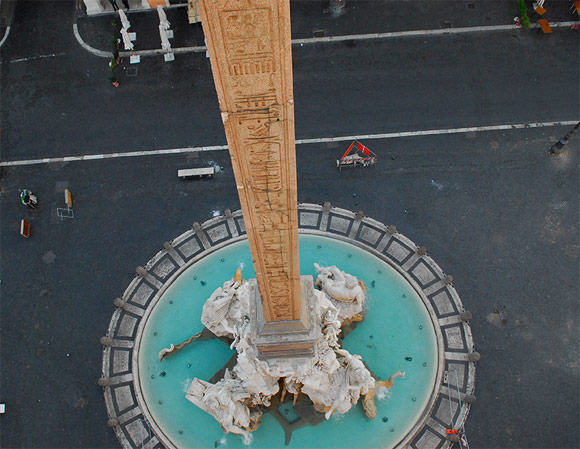 An unusual view of the Fountain of the Four Rivers. Photo © Giampiero Pecorini.

The four river Gods, which are the protagonists of the Fountain of the Four Rivers represent the four continents then known: the Danube (Europe), the Rio de la Plata (the Americas), the Nile (Africa) and the Ganges (Asia).

To complete the four allegorical characters, Bernini sought the help of several sculptors: Claude Poussin for the Ganges, Giacomo Antonio Fancelli for the Nile, Antonio Raggi il Lombardo for the Danube and Francesco Baratta for the Rio della Plata. Read more at: the Four River Gods of Piazza Navona 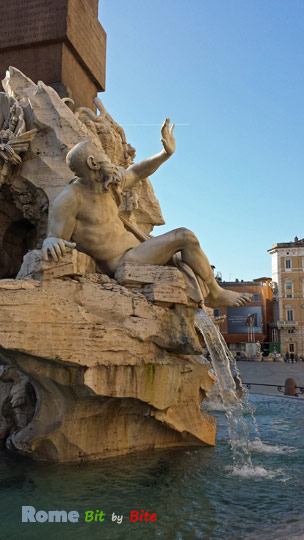 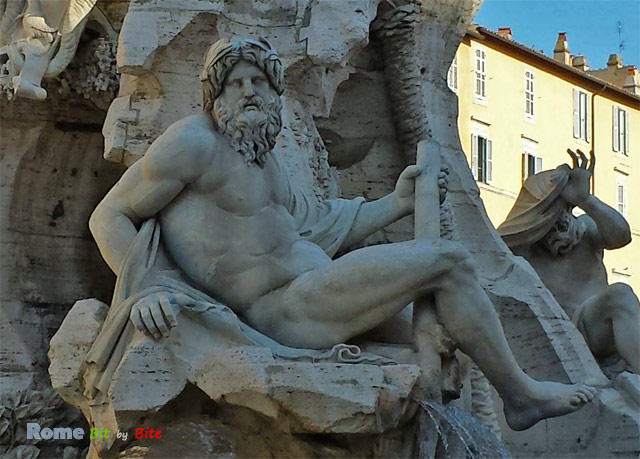 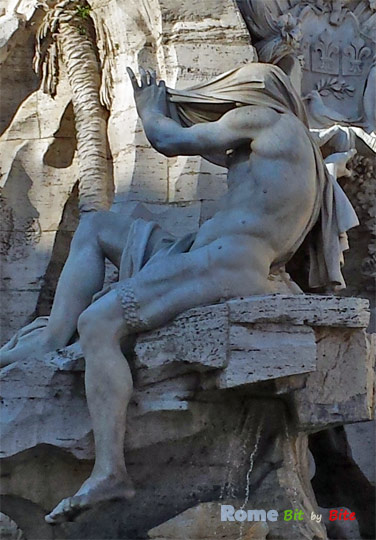 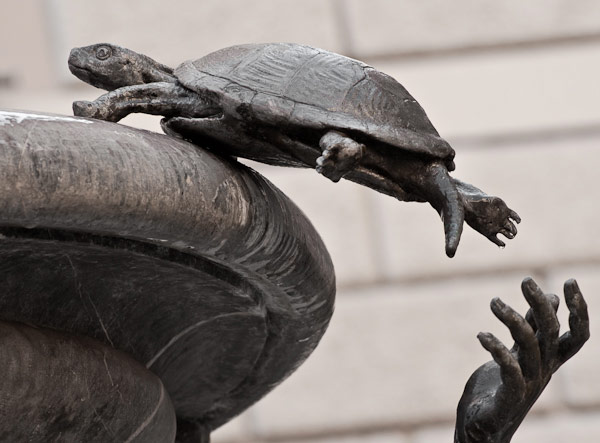 Created by Taddeo Landini in 1581-1584, probably after a design by Giacomo Della Porta, the late Renaissance fountain was supposed to include four dolphins instead of the four turtles.

However, during restoration works led by Bernini in 1658, the empty spaces left by the missing dolphins were filled with four turtles, a recurrent subject of Bernini, which were already used on the Palazzo Barberini fountain. The turtles are so well integrated into the fountain that it is hard to believe that they were added only a century later! 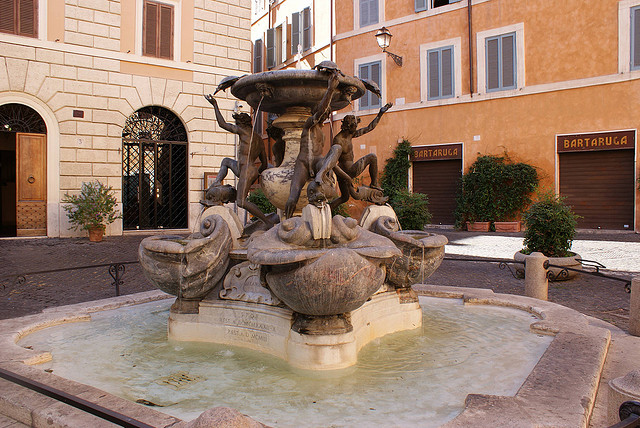 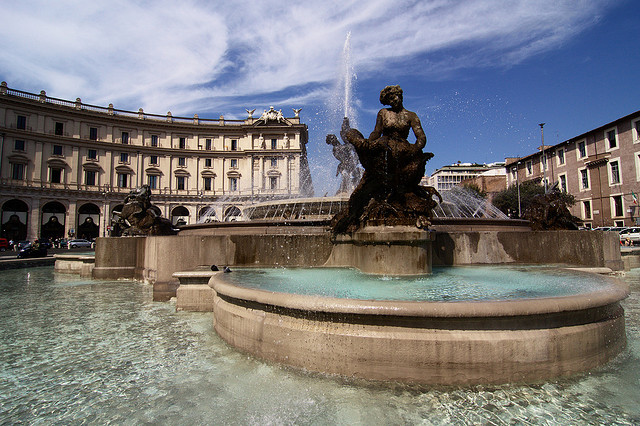 Built in 1870, the Fountain of the Naiads counts four groups of reclining nymphs, symbolizing the spirits of rivers and springs. The nymphs as well as the central Glaucus, the mythical fisherman who became a sea god, are by Mario Rutelli (1901-1911). 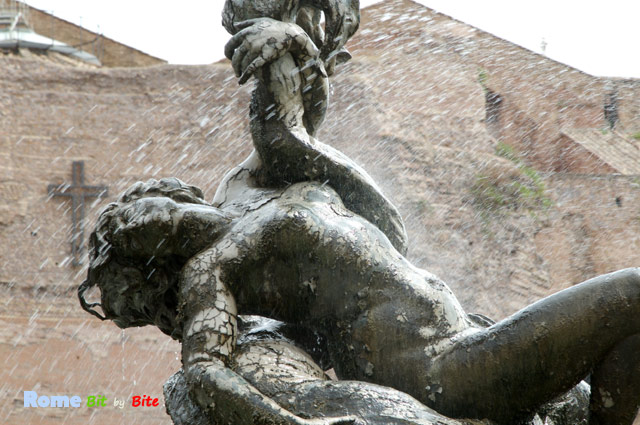 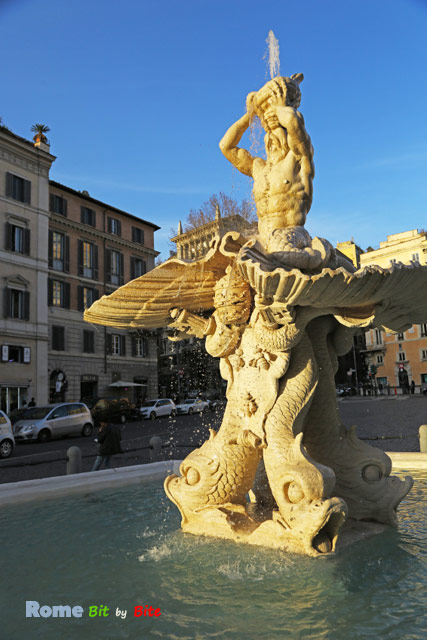 The Baroque style Triton Fountain on Piazza Barberini was entirely designed and sculpted by Bernini. It is an important work as it was Bernini’s first official commission for a public fountain, sculpted in 1643. The fountain was meant to celebrate the proximity of the papal residence, reason why it contains many references to Urban VIII (such as the Barberini bees), patron of the masterpiece. Note that the bees from the Barberini coat of arms are the main subject in another one of Rome’s fountains, the Fontana delle Api.

The initial intent of Bernini was that the spray would reach the scallop shell and from there the water would overflow into the lower basins, but as the water pressure is now lower than at the time when Bernini designed the fountain, some of the initial effect has been lost now. 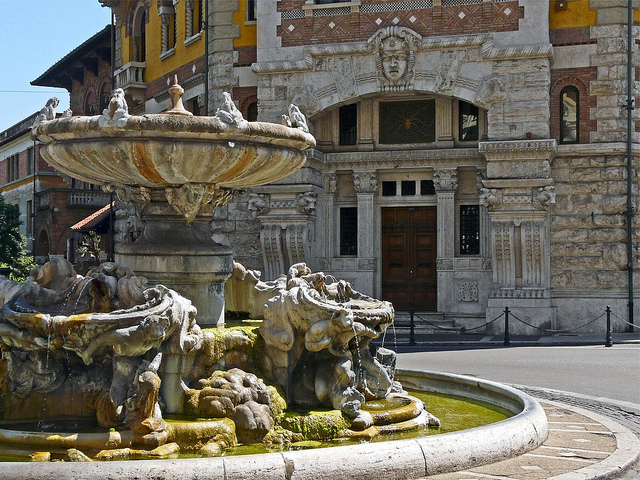 The Fountain of the Frogs is located at the center of the architecturally unusual and beautiful quarter, known as the Coppedè quarter.

The fountain became world famous after the Beatles stepped, fully dressed, into it. Nearby was a famous bar, the Piper, frequented by celebrities such as the Rolling Stones, Pink Floyd and Nirvana, where the Beatles used to hang out in the sixties. 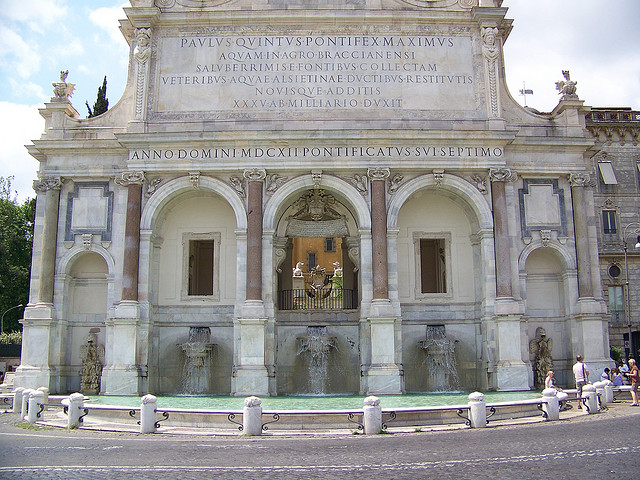 Better known as the Fontanone del Gianicolo (big fountain on the Janiculum Hill), the Fontana dell’acqua Paola, is THE Roman fountain par excellence. Designed by Giovanni Fontana, the fountain originally had five ponds. They were changed into one single pond in 1690, based on a design made by Bernini for the Trevi fountain that was never carried out. 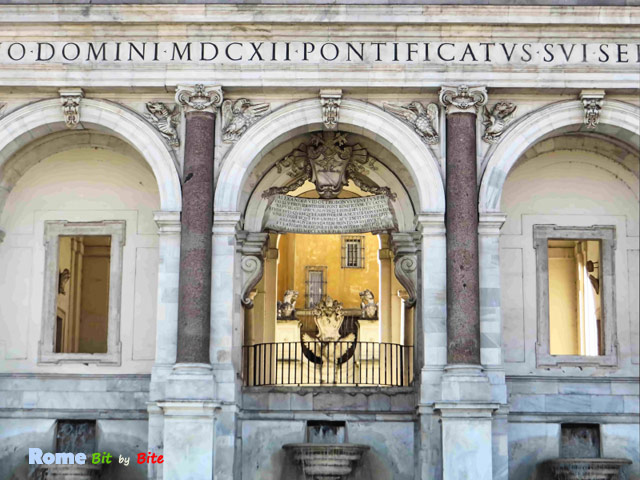 The opening scene of the Italian movie La Grande Bellezza by Paolo Sorrentino was filmed at the Fontana dell’Acqua Paola.

Created in 1580, the Facchino is part of a series of six ‘Talking’ Statues that can be found in various parts of Rome. Why they are referred to as talking statues and what their history is, can be read here. The Facchino is the youngest of them, as it is ‘only’ 432 years old. Only two of the other Talking statues are also fountains: the Babuino and Marforio. 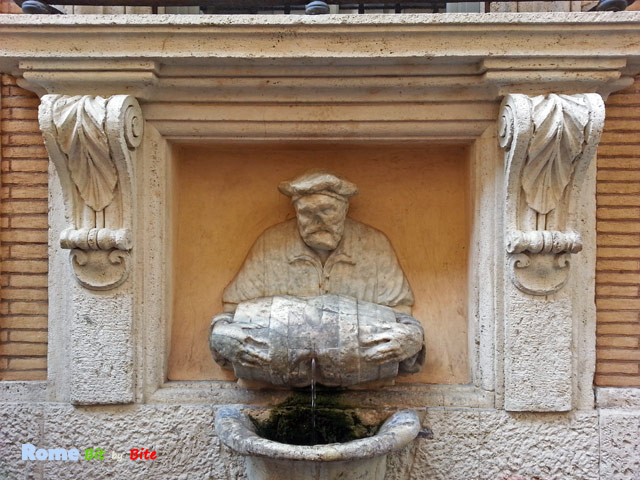 The fountain represents an acquarolo, a man carrying a barrel containing water from the Tiber that he would sell from door to door at a time when the Roman aqueducts were under repair and the city’s fountains were dry.

More about the Talking statues of Rome 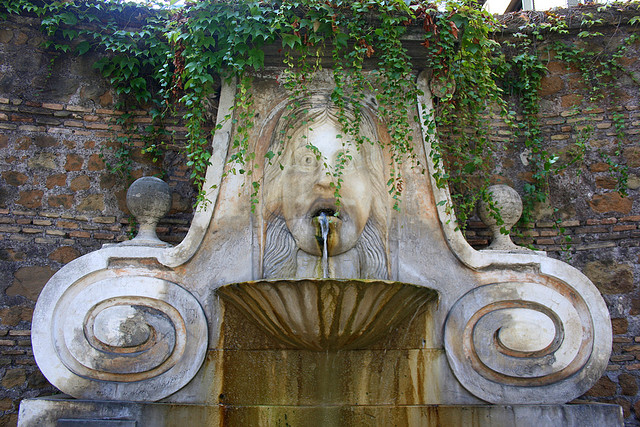 The Fontana del Mascherone is made of a marble mask standing above a huge granite bassin. Both probably stem from an ancient Roman building, before they were moved to their current location at the intersection of Via Giulia and Via del Mascherone. 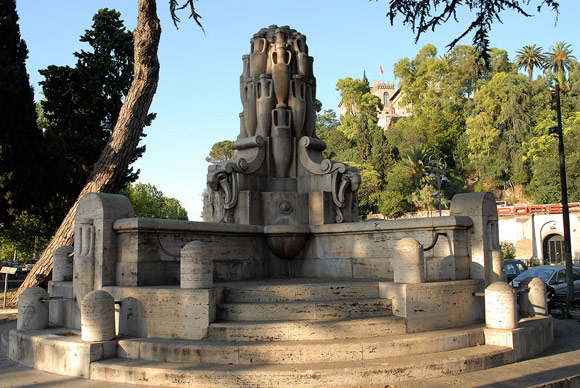 The Fontana delle Anfore on Piazza del Emporio was designed by the architect Pietro Lombardi for the newly defined official rione Testaccio in the 1920s.

The amphora is intrinsically linked to the history of Testaccio and the origin of its name. Indeed, it was in this area on the left bank of the Tiber that the clay amphorae which were used to transport wine and oil into Rome, were stored once they had been emptied in Rome. It was prohibited by law to re-use the amphorae (especially the ones containing oil) once they had been emptied, so they were abandoned on the left bank of the Tiber after use. With the passing of decades, the shards (testae in Latin) had accumulated to form a 35 meter high hill, which came to be known as Mons Testaceus (Hill of Shards). Not surprisingly, when the area officially became the twentieth district of Rome, it chose the amphora as its symbol. 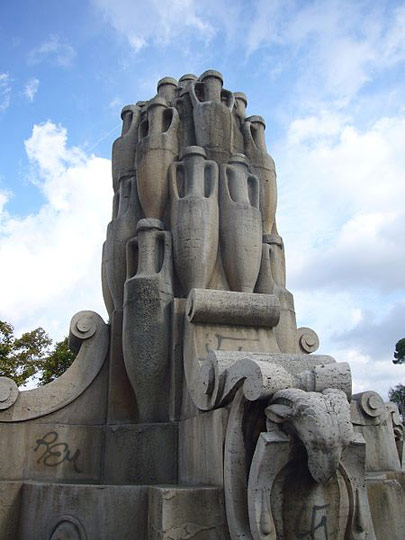 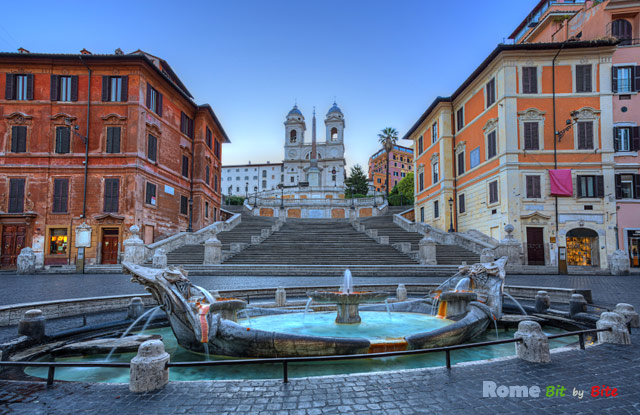 Designed by the father of the famous Bernini, Pietro Bernini, the fountain was commissioned by Urban VIII in 1629 to commemorate the flood of 1598. The form of the fountain is supposed to express the idea of a boat stranded in Piazza di Spagna during the severe flood of the Tiber. The boat is decorated at either end with the suns and bees of the Barberini coat of arms. 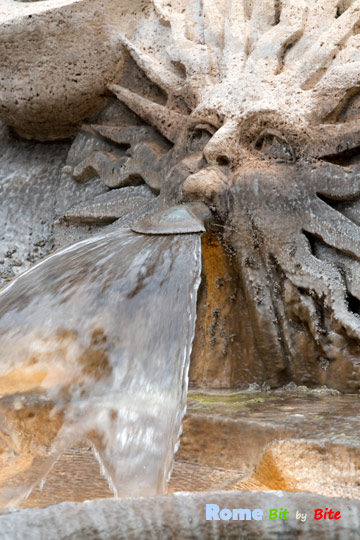 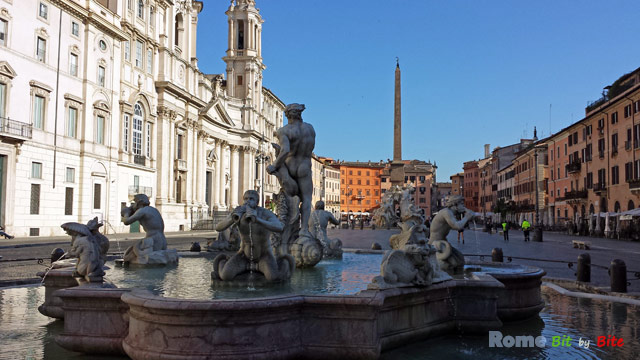 Originally designed by Giacomo della Porta in 1575, who also designed the fountain on the other side of the Fountain of the Four Rivers on Piazza Navona. The original fountain had four tritons and a central dolphin, but was later renovated by Bernini, who added the central figure of the Moor holding a dolphin by the tail. 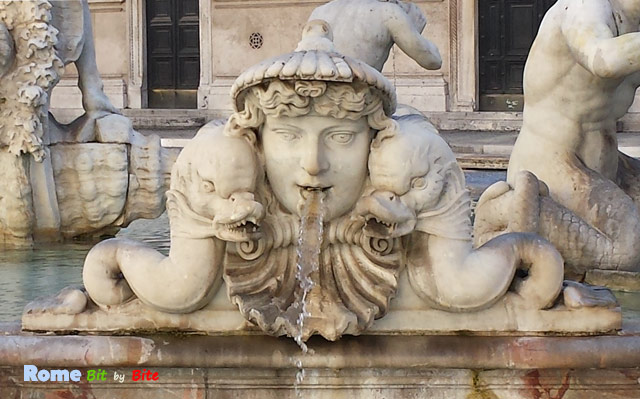 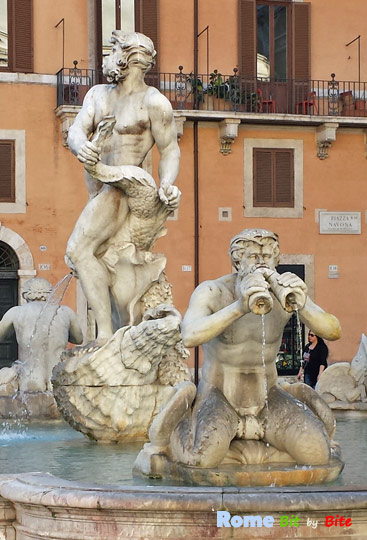 A story goes that Bernini purposely made the Moor’s face look like Pasquino, which would have been a kind of disguised insult, as Pasquino was another of Rome’s talking statues, which were used to post caustic and satirical messages against the religious and civil authorities of the city. – See more at: Talking Statues of Rome.