Trastevere
(The picturesque Roman district "beyond the Tiber")
Long considered an isolated, proletarian suburb of Rome inhabited by immigrants, fisherman and craftsman, Trastevere gained importance as one of the most picturesque reminiscences of what the old quarters of Rome looked like in medieval times.

Trastevere got its name from the Romans who referred to the area as trans Tiberim (meaning "beyond the Tiber"), a rather condescend way to refer to an area that they did not recognize as being part of the wealthy and powerful city of Rome. 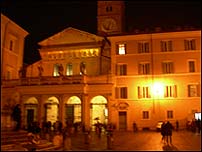 Due to their long isolation, the inhabitants of Trastevere developed a culture of their own: a centre of spiritual, artistic and social life. Over the centuries the small craftsmanshops and trattorie became more refined, and the area evolved into a more ethno-chic, artistic area where with the small artigianato shops and pubs now alternate with fashionable restaurants and local artist galleries. However, to this day, Trastevere remains the area of Rome tied to popular traditions where the inhabitants consider themselves the romani de Roma (the Romans of Rome).
Places we like in Trastevere...

A tiny shop with unique, selected, handcrafted art pieces from Syria and Uzbekistan, such as tablecloths, oriental rugs, hand-painted glasswork, dresses, and much more.
Fior di Luna
(icecream and chocolate)

One of the typical restaurants of Trastevere: fashionable, but relatively low-priced.
Fixed-price lunch menu at 10 Euros and dinner menu at 13 Euros.

Considered one of the best pizzerias in Trastevere where the typical, very fine and crusty Roman pizza is served. 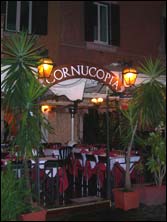 One of the better fish restaurants in Trastevere. Elegant setting, candle light and nice terrace for eating outside in the piazza in Summer.

Piazza in Piscinula 18
Tel: +39-06-580.03.80
Piazza Santa Maria in Trastevere at night with the Santa Maria basilica in the background

Rome.YourGuideToItaly.com,
your independent guide to Rome and the Roman culture & history.